Perhaps because it was Throwback Thursday but it was a day of connecting with people, places and things in my past.

I was asked by a former student to shoot some head shots for him to submit to a contest he was entering.  We were set to meet at 7th St and McDowell.  My first apartment was at 5th St and McDowell.  The apartment building is still there.  I worked at an office at Palm Lane and Central, about 3/4 of a mile away and often walked to work, which started at the civilized time of 9:00.  I remembered my favorite bachelor fare of cheese omelets  flour tortillas and grape jelly, my dad’s occasional homemade lasagna, late runs to Jack in the Box for tacos (the ORIGINAL Jack Tacos, not the cardboard they serve today)  lunch at Whataburger and watching TV on a 13 inch black and white TV.  The freeway hadn’t been built yet.  The area where it was to be built was pretty dead as the houses and land had all been sold to make way for the new freeway, only to be entangled in a myriad of litigation that had stalled the project. It was nice to see how much the neighborhood has revived since.  The grocery store I shopped at is still there, but it is surrounded by Subway and Starbucks and a host of other business that have sprung up across the street from my former home.

As I was pulling into the parking lot, I got a text from my friend Dave.  He gave me some sad news.  Apollo will no longer be teaching black and white film and wet lab.  It will be going completely digital.  I know all the good points about digital and use digital in my own business.  But I believe there is a place for film in the learning process of photography.  A person learns about lighting  and exposure and composition and has to make these decisions without the crutch of having a button in Photoshop to make up for mistakes.  But I am retired and a quality photography curriculum is not my concern anymore.

After reading Dave’s text, I grabbed my camera and went to Starbucks to meet up with my former student Sergio.  Sergio, and his brother Dominique, ran track and played football for me, plus I had both of them as students.  To say that their life away from school was a bit more than rough is a huge understatement.  With all these obstacles in their life working against them, the chances of the two brothers becoming casualties of life were extremely high.  And, sad for me to say, many of their teachers bought into this future for them, writing them off as delinquents with no hope for the future.  But, to use an old cliche’, they pulled themselves up by the bootstraps and persevered through all of these hard times and made it through school.  They now are productive citizens with families of their own.  These guys are a big part of my “why I taught” reasons.  They are the true heroes of their life’s successes.  I am happy that I was able to play a small part in the story of their lives.

One of the things I remember about Sergio is that he always made me laugh.  He was bit of a class clown.  That has carried over into his adult life.  Sergio’s night job is being a stand up comic.  Sergio performs at local comedy clubs and has performed in New Mexico and Texas as well.  What I find interesting in talking with Serg is the amount of time and effort he is putting into learning the craft of comedy.  He attends workshops and seminars to learn better ways to present his material.  It was fascinating for me to hear him dissect the things he has learned and applied to his act.  Who knew comedy was so complicated?

Which brings me full circle to the reason why I am taking head shots of Sergio.  The young man is entering the Black Comedy Competition and needs to submit a photograph to the contest organizers.  I am glad that he thought of his former coach and photography teacher as the guy for the job.  We decided to meet at noon yesterday at 7th St and McDowell, close to his work and right across the street from my old apartment.  Got a little Starbuck’s, courtesy of Sergio, talked over old times and got to take some great photographs of this fine young man.

Sergio is opening for Jimmy Shubert at the Comedy Spot Comedy Club in Scottsdale this Saturday at 10 pm.  You should check out his act, I know you will enjoy it.  For full details, click here. 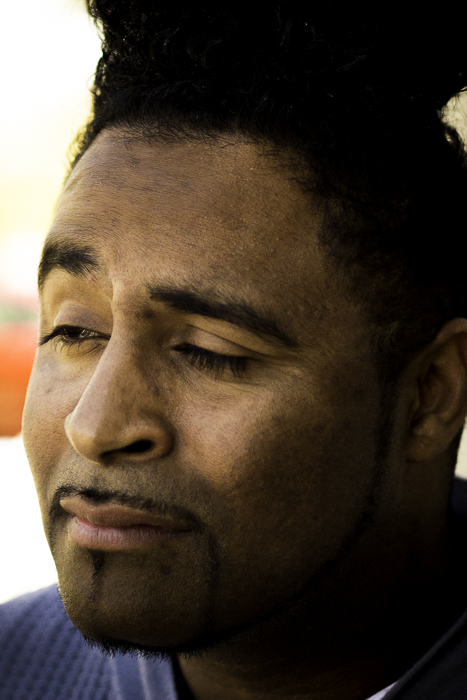 *Credit where credit is due:  “Comedy is not Pretty is the name of a 1979 comedy album by Steve Martin.

Trivia:  The best Steve Martin movie that nobody has ever seen is “Leap of Faith”.