Prescott Arizona, the town I grew up in, always knew how to celebrate the 4th of July in grand style.  The Frontier Days Celebration.  The World’s Oldest Rodeo.  Whiskey Row.  Fireworks at Watson Lake.  And three days of city slickers coming up from Phoenix to participate in all the festivities.  Prescott was a spectacular place to be on the 4th of July.

One of the service groups held a fund raiser during Frontier Days.  Basically, if a person ventured onto the Courthouse Square without western duds on, a “sheriff” would arrest and that person and put them in the “hoosegow” in the middle of the square.  The bailout money for that person went to the service group sponsoring the jail.  I would assume that the flat-landers found this cute for the most part.  It certainly boosted the sale of western clothes.  The best was always when one of your friends who should have known better got arrested.  And of course, all of that person’s buddies never had any money to bail them out.  Kind of like “you live in Prescott you idiot.  You knew better!”

On the downside of this, I was forced to wear bolo ties whenever we went down to the square.

During the night, the street in front of Whiskey Row would be shut down for a street dance.  As I recall one year Buck Owens and his Buckaroos performed.  One of bars on the block had a life size horse statue above its entrance.  The highlight of the evening was when the first drunk cowboy managed to climb up on that horse and try to ride off into the sunset with the roaring approval of all the cowboys and cowgirls on the street.

I’M READY FOR MY CLOSE UP, MR. DeMILLE

The last summer I lived in Prescott was 1971.  And this particular 4th of July was a very special 4th in the history of the town.  The film Junior Bonner, starring Steve McQueen, Robert Preston and Ida Lupino was being filmed in Prescott, with the 4th of July activities being central to the story.  My last chance for Hollywood fame and glory was during the filming of Billy Jack in Prescott the year before.  A few of my friends and acquaintances had been hired to beat up Billy Jack down at the Courthouse Square.  Alas for me, my leg was in a cast so I couldn’t audition for the part of one of the local Prescott thugs.  I thought that with Junior Bonner being filmed I could some how manage to get my charming face into the film by being in the crowd at the rodeo or the parade.  Dream big, baby!  Dream big!

During Frontier Days, the community theater would perform an old fashion melodrama.  I got a small part in that summer’s production.  I played the Devil.  Really just a walk on part.  I walked on, collected the bad guys, and herded them off to my “home” at the business end of my pitchfork.  Easy peasy. 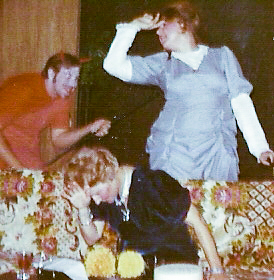 The cast of the melodrama was also going to be in the Frontier Day Parade, which was also going to be filmed  as part of the movie.  Robert Preston, who played Steve McQueen’s father, would be riding in the parade as part of the movie.  I must admit that I was a little excited.  This was my first time ever being in the parade, AND it was being filmed for a Hollywood movie.  On parade day the cast piled in to the back of an antique pickup truck.  I even carried a sign that said HISS…just so people wouldn’t confuse me with the good guys. 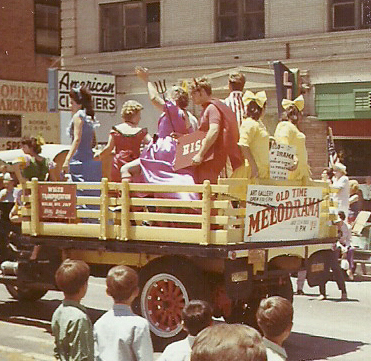 The film was released in 1972.  I couldn’t wait to see it.  I remember they filmed a lot of the truck going by.  I couldn’t wait to me as Satan traveling across the big screen.  I had even decided to play it real cool and NOT jump up in theater and start pointing saying “THAT’S ME!”

If life had a sound track, right about now the sad music would be playing, indicating that not all  has gone well for yours truly.  The truck barely made it into the movie.  I did catch a quick glimpse of my hand waving but that is about it.   Took a lot of self control NOT to stand up and yell “WHERE AM I?”

In rekindling the memories of the 4th of July, 1971, I did figure out something.  If on some rare occasion someone were to ask me what Jack Nicholson and I have in common, I would tell them that both Jack and I appeared in a film playing the Devil.